BASILICA OF ST. MICHAEL THE ARCHANGEL 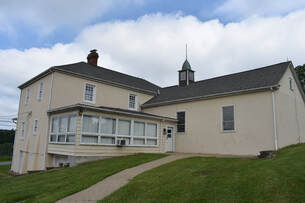 ​In the year 1795 Father Demetrius Augustine Gallitzin  came to the Loretto district for the first time, though he came  under the name of Augustine Smith and the name of the hamlet had not yet been changed from McGuire's Settlement to
Loretto. As a priest he differed a little from others, but socially there was a most prominent difference, for he was of noble blood, a Russian Prince.

He was born on December 22, 1770 at the Hague, Holland, the son of Dimitri Alexeievitch Gallitzin, Envoy Extraordinary of Catherine the Great to the Hague, and Amalia von Schmettau, daughter of a renowned Prussian Field Marshall. As a boy he grew up without faith because French philosophers of the Enlightenment, among them Claude Adrien Helyetius, Diderot, and Voltaire, had succeeded in making his Father an unbeliever and in turning his mother from her Catholic faith. When he was 17 years of age, though, Divine Providence restored the faith of the mother and Dimitri, baptized as a child, was introduced into the teachings of the Church for the first time.

The early education of the Prince was under close scrutiny of his mother, Princess Amalia, who never ceased being a student herself, who was always learning new languages, new systems of philosophy and the other seemingly important subjects of the day, and who in turn tried to impose the same on her son. Having received a commission in the Russian army at a young age, Dimitri was obliged to become proficient in horsemanship, mathematics and other assigned army requirements. With the strictness of his mother and the interest of his father in a military and diplomatic career, the young life of the Prince was not just the happiest, though he was to appreciate and value in later years the worth of it all.

In 1792 the parents of Dimitri were stunned to hear him announce that he wished to become a priest. The mother who considered him to be as weak as water, nevertheless was overjoyed at the thought, while the elder Prince became furious that such a disgrace might befall the great Gallitzin name. With the plan being to dissuade him and at the same time to get him  away from the certain and imminent outbreak of revolutionary hostilities all over the European continent, a world tour was arranged and on August 18, 1792 Demetrius, under the name of Smith, so as not to be recognized as a Prince, set sail from Rotterdam and arrived in Baltimore on October 28, 1792.

He came under the influence of Bishop Carroll, first ordinary of Baltimore, and asked to be admitted to the seminary. At first, Bishop Carroll, already having experienced difficulty with the Europeans not able to withstand the rigors of pioneer and semi-pioneer life, refused to accept the candidate Smith, but later did so when he perceived the great devotion of the Prince to the Blessed Mother. On March 18, 1795 Augustine Smith was ordained to the priesthood, the first one to receive all the Orders, from tonsure to priesthood, in the United States.   Father Smith was assigned to Conewago, Pennsylvania, and shortly afterwards was summoned, in October of 1795 to McGuire's Settlement for an urgent sick call. The settlers told of their earnest desire to have a resident pastor and Father Smith, already having fallen in love with the entire district, promised to seek permission to return permanently.

In July of 1799 the Prince Priest was assigned as the first pastor of McGuire's Settlement, and as his prime venture, undertook the building of a church. This was completed in time to offer Midnight Mass at Christmas and an elaborate celebration was held. Using money he had received from his mother in Europe as part of his inheritance, he bought land for his people, bought lumber, cattle, had things transported from Baltimore, established a tannery, gristmills, etc. to encourage more people to settle around the town whose name he had changed to Loretto after the famous Shrine of Our Lady in Italy to which he had devotion.

His main purpose was to get people to be serious in working for their salvation and he strove to change them from uncaring backwoodsmen into respectful and god-fearing men and women. He spent over $150,000 that he had received and borrowed, thinking never of himself, but always of his loved ones, his people of Loretto.

Hoping to have a diocese in western Pennsylvania, Father Gallitzin refused the Bishoprics of Philadelphia, Louisville, Cincinnati and Detroit when they were offered to him.

One of his biographers, Father Ferdinand Kittell, brought out many of the qualities of his person when he wrote: "He lived simply and even rudely in a log cabin, slept upon the floor with a book for a pillow, ate coarse food, wore coarse clothing, was "untiring in his manual labor for his people, unrelenting in his austerities. It was a solitary life with no intellectual companionship; long tramps on foot over Indian trails, long journeys on horseback to isolated settlements to minister to the sick and dying; hours of fasting and prayers in a church that was never heated by fire; but it was lived in cheerfulness and brightened by buoyant hope. For him the light shone clearly and from one place."

After a very pious life in which he wore himself out for his God and people as the "Apostle of the Alleghenies", Father Gallitzin died on May 6, 1840 and according to his last request was buried just outside his church amidst the people he had come to serve and love. To this day the great influence of his pioneer missionary can still be vividly noticed wherever one goes on the ridges of the Alleghenies.

Archbishop John Ireland, D.D., a great figure in American Catholic history, told admirably of Father Gallitzin at the 100th Anniversary of his coming to Loretto, when he said: "In America, too, there was more to be done for God and for  humanity than in Europe. Here the harvest was abundant, the reapers few. Only a few priests and one bishop were there in the United States, and Catholics were scattered from one end of the country to the other, receiving the administrations of religion once in a year, or perhaps once in two or three years. And in America Catholics were poor, and formed, both socially and politically, an unimportant and prestige less element. The heart of Gallitzin went out to the Catholics of America. He said: Here 'I will stay, these I will serve. I will labor for my fellows who are most in need of me; I will be a priest for the sake of the priesthood alone. Oh, Gallitzin, truly was thy priesthood pure from all unholy alloy. Truly was thy consecration of thyself to the Catholics of America disinterested and entire! Catholics of America today thank thee and invoke thy intercession with the eternal God that thy spirit of Sacrifice burn brightly in the bosoms of tens of thousands. "

​The Tomb of Father Demetrius Gallitzin
As one enters the crypt containing the mortal remains of Father Gallitzin, he/she is able to view only a metal vault in which the glass top coffin was enclosed in 1940 on the 100th Anniversary of Father Gallitzin's death. At the time of death, in 1840, the Prince was placed in a wooden coffin made by Lewis Sturm for $8.00, which in turn was placed in one of zinc, and was buried just outside the Chapel House where he had passed thousands of times.

Seven years later his remains were lifted and moved a considerable distance to the present location, where a huge cross and stone monument were erected.

On July 20, 1891, the body of Father Gallitzin was exhumed a second time for the purpose of renewing the decaying coffin with a metallic air-tight casket. The remains were transferred with solemn and appropriate religious ceremonies into the sanctuary of St. Michael's Church, there to be viewed by those present. Nearly all the bones had crumbled into dust but the skull of the Prince was found to be almost perfect. Such was all that remained of one who, if in the Providence of God he had not been called to be the "Apostle of the Alleghenies", might have been among the first in the government of the Russian Empire.

With the approach of the Centenary of Loretto and of Father Gallitzin's coming to the settlement in 1799 plans were made to erect a bronze statue of his exact likeness over the crypt. Such a statue was procured and paid for by Charles M. Schwab and was placed on a magnificent granite base. This was dedicated on October 10, 1899 when the festive sermon was delivered by the great Archbishop Ireland of St. Paul in the presence of the Apostolic Delegate, the governor of Pennsylvania and many other dignitaries and an audience estimated at more than 5,000 persons.