BASILICA OF ST. MICHAEL THE ARCHANGEL

What is a Basilica? 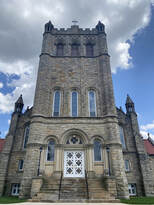 The title basilica dates back to the early Greek and Roman times and referred to a type of public building.
In the 4th century, Basilicas began to be used as places of worship. It was during this time that construction
of the greatest basilicas of Rome were started. Today, the term Basilica is a special designation given
by the Holy Father to certain churches because of their antiquity, dignity, historical importance or
​ significance as a place of worship.
Churches honored with the title Basilica belong to two classes, Major and Minor.  There are eight major basilicas:  St. Peter in the Vatican, St. John Lateran, St. Mary Major, St. Paul-Outside-the-Walls, St. Lawrence-Outside-the-Walls, St. Sebastian (all in Rome), the Basilica of St. Francis in Assisi, and the Basilica of the Holy Cross in Jerusalem.  Of the major basilicas, four share the title Patriarchal Basilicas, being the original and primary basilicas and each having within a Patriarchal Throne.  All other basilicas are minor.  Presently there are more than 80 minor basilicas in the United States,
In order to be names a Basilica:

The church must have been consecrated (St. Michael the Archangel was consecrated October 2, 1901); the liturgical rites (celebration of the Holy Eucharist, sacraments of penance and other sacraments) should be executed in an exemplary way with fidelity to liturgical norms, and the active participation of the people of God (parishioners). It should be large enough and the elements required for liturgical celebration (altar, pulpit, and celebrant's chair) should conform to General Statutes of the Roman missal.
​The title Basilica carries with it both privileges and obligations.  Among the primary privileges are the right to display, both inside and outside, the coat of arms of the pope who designated the church as a basilica, and the display of the church’s own coat of arms, bearing the marks of the pope.  In addition, two additional symbols rooted in the papal court, the tintinnabulum and the ombrellino are given to the church for use and display.  The tintinnabulum is a bell which had the practical function of alerting the people to the approach of the Holy Father during papal processions through the streets of Rome.  The ombrellino is an elaborate umbrella which would protect the Holy Father from inclement weather.  The panels for the ombrellino are made of alternating red and yellow fabric (the colors of the pope).  It is always displayed half-way open to signify that the church is ready to welcome the Holy Father!